Having the approval and support from the Government, Department of Foreign Affair and the appropriate authorities of Vietnam and Philippines, the Fund for Community of IPPG, run by Ms. Tien Nguyen – Vice President of IPPG, has donated 750.000 facemasks and 16.500 protective suits to the Department of Foreign Affair & the people in Philippines in the latest attempt to fight off Covid-19. 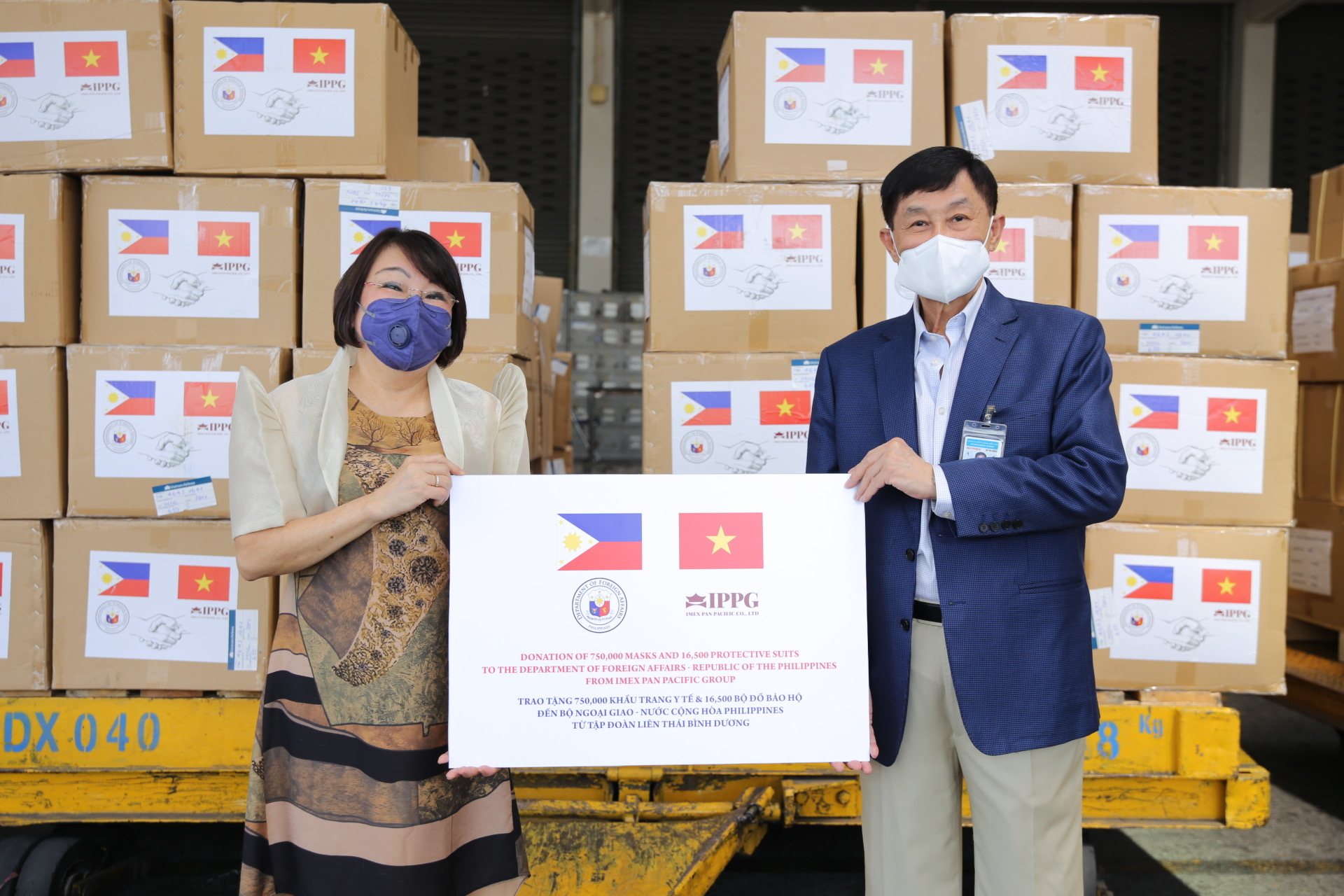 On April 29th 2020 by 7:00 AM, IPPG hired a whole flight of Vietnam Airline (NO. VN9651) to carry the load of all the medical equipment from Tan Son Nhat Airport and ship them to Manila City, Philippines. The representative of the Department of Foreign Affair Philippines has come to the airport to receive this shipment. 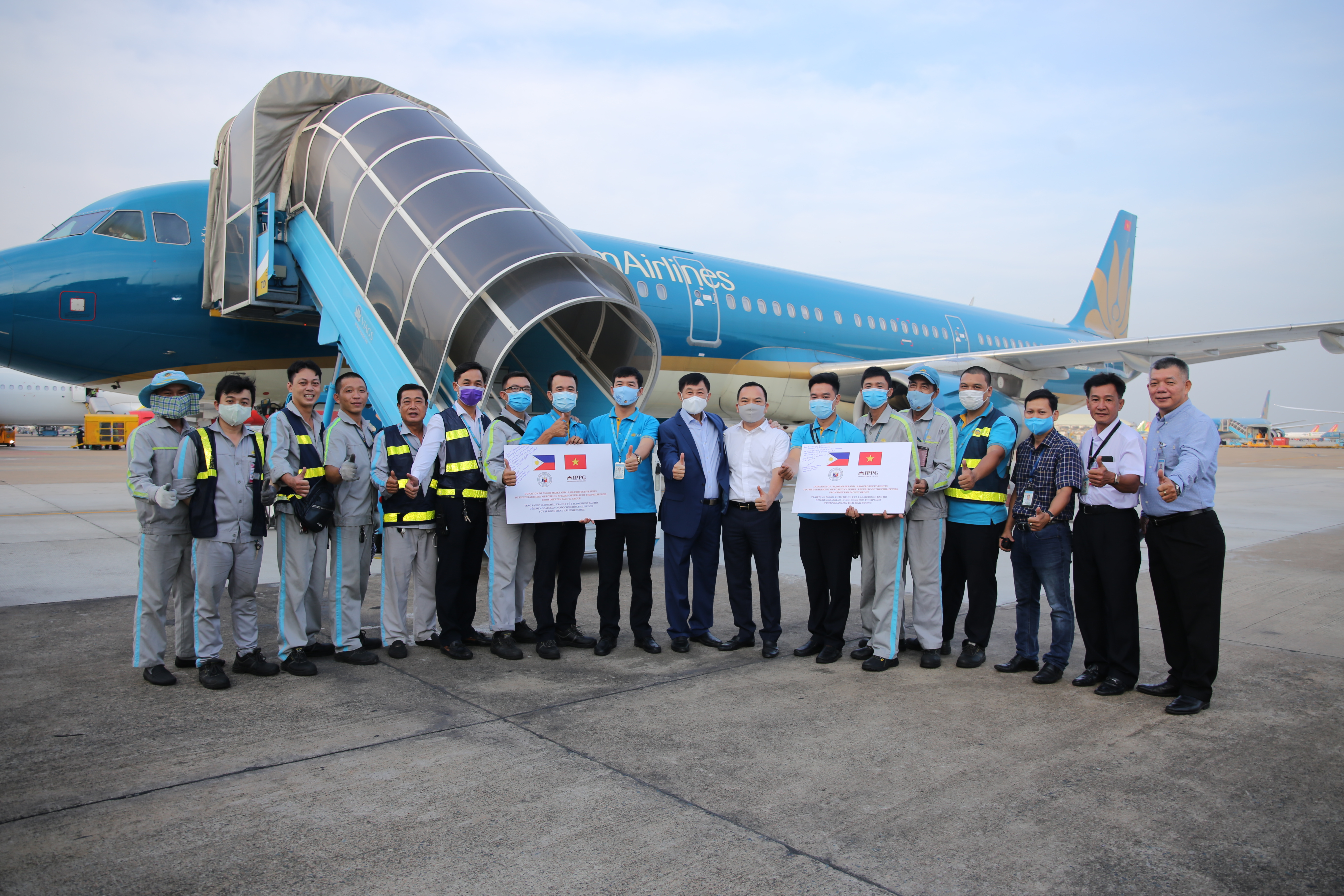 Mr. Johnathan Hanh Nguyen and the Vietnam Airline Logistics team got ready for the shipment flight on April 29 to Philippines. 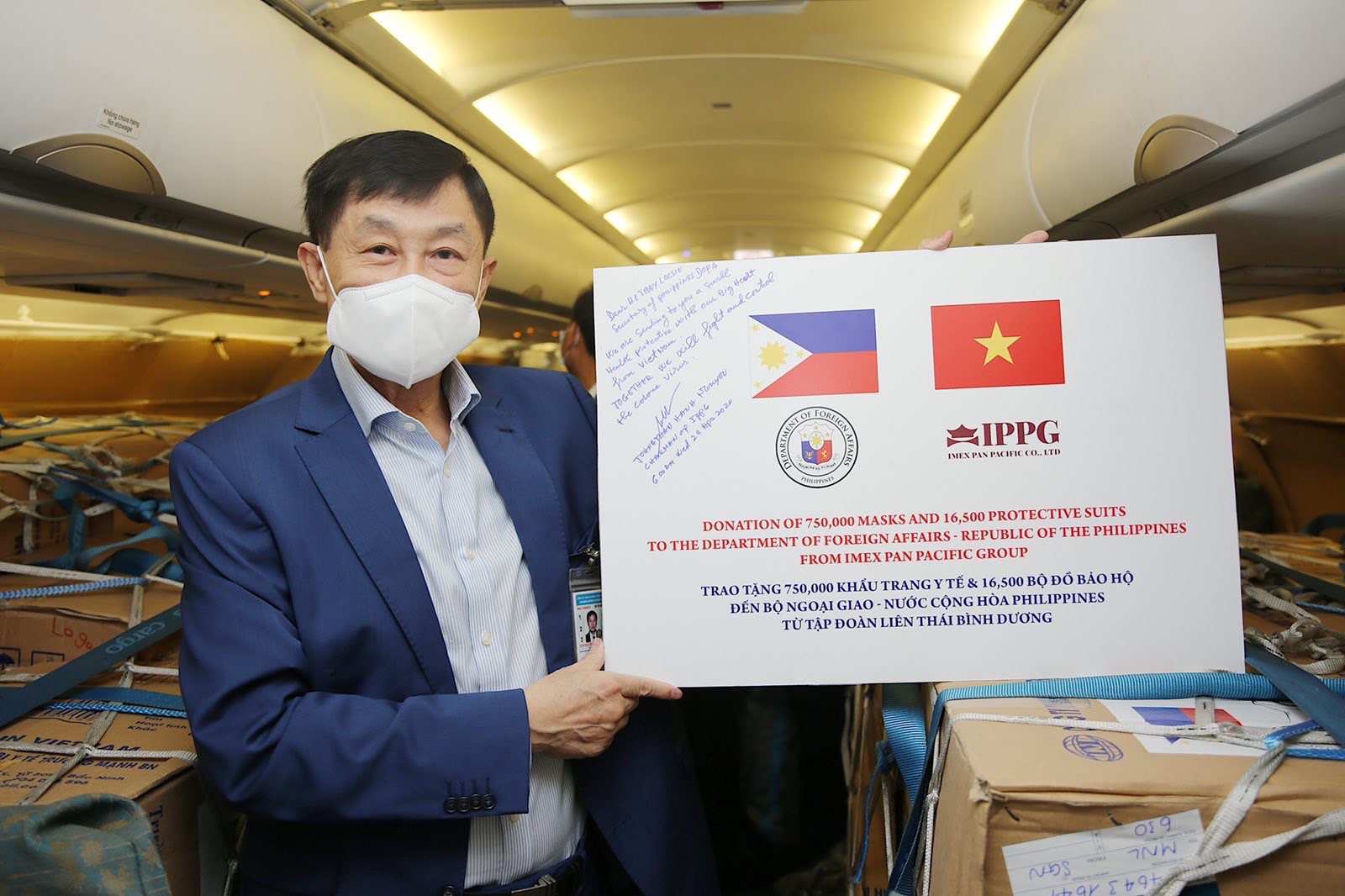 Mr. Johnathan Hanh Nguyen also attended to the flight to sign the Donation of Medical Equipment Panel to the representative of Foreign Affair Philippines.

By 11:00 AM of the same day, Mr. Teddoro L. Locsin Jr., the Secretary of Foreign Affair Philippines has hosted a media meeting with many major publishers of Manila, such as: PTV4 of Philippines Government, CNN, GMA 7, Philstar, etc. to join the ceremony of receiving medical equipment from IPPG. This ceremony took place at Department of Foreign Affair Office. Mr. Henry Nguyen, President of IPP in Philippines has represented the corporation to give this meaning gift to the  Department.

On the official Twitter account of Department of Foreign Affair Philippines, the Secretary has twitted: “Today, Secretary Mr. Teddoro L. Locsin received over 750,000 masks and PPEs donated by Vietnamese business tycoon and well-known philanthropist, Mr. Johnathan Hanh Nguyen, to help protect DFA’s frontliners against COVID-19. Mr. Nguyen was represented by his son and IPPG-Philippines President, Mr. Henry Serrano Nguyen. The donation arrived in Manila via a chartered flight arranged by Mr. Nguyen and was made possible through the timely assistance of the DOF, BOC, and other government agencies.” Speaking at the ceremony, the Secretary of Philippines’s Department of Foreign Affair said: “Thank you to my kind & age-old friends in Vietnam: Mr. Johnathan Hanh Nguyen. These medical equipment means a lot to us in this fight against Covid-19” 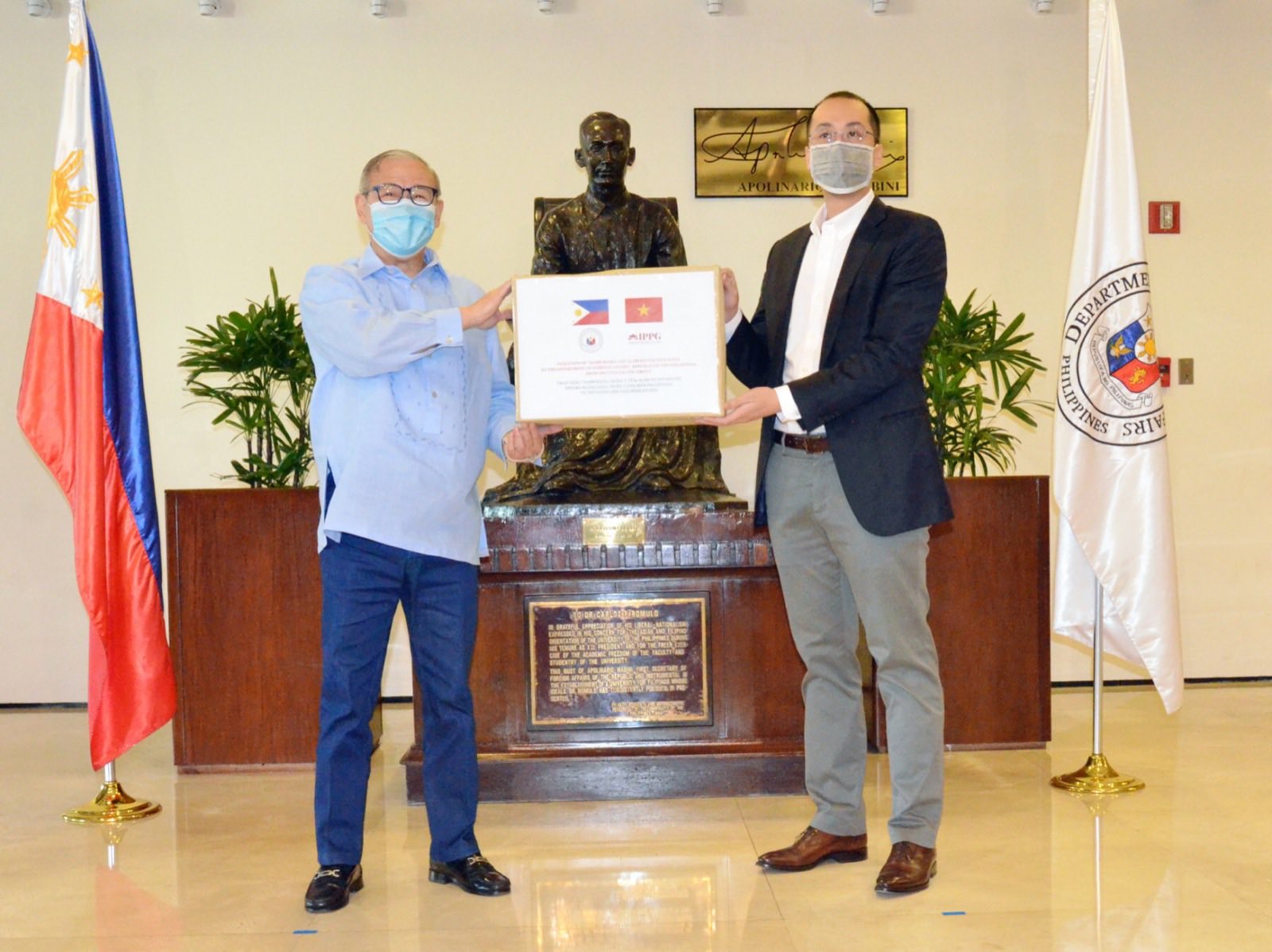 Mr. Henry Nguyen – Representative of IPPG gave the medical equipment to the Secretary of Foreign Affair in Manila.

Previously, IPPG has donated 36 billion VND to help the anti-covid-19 campaign and fight off the Saltwater Intrusion in Mekong Delta, Vietnam. Now, they continue this act with hope to bring more reinforcement to the friendship between Vietnam & Philippines. This is also the first act of the Fund for Community of IPPG, run by Ms. Tien Nguyen – President of the fund. After social distancing time, she promised to contribute more for the community through this Fund and this is her fullfilling that promise. 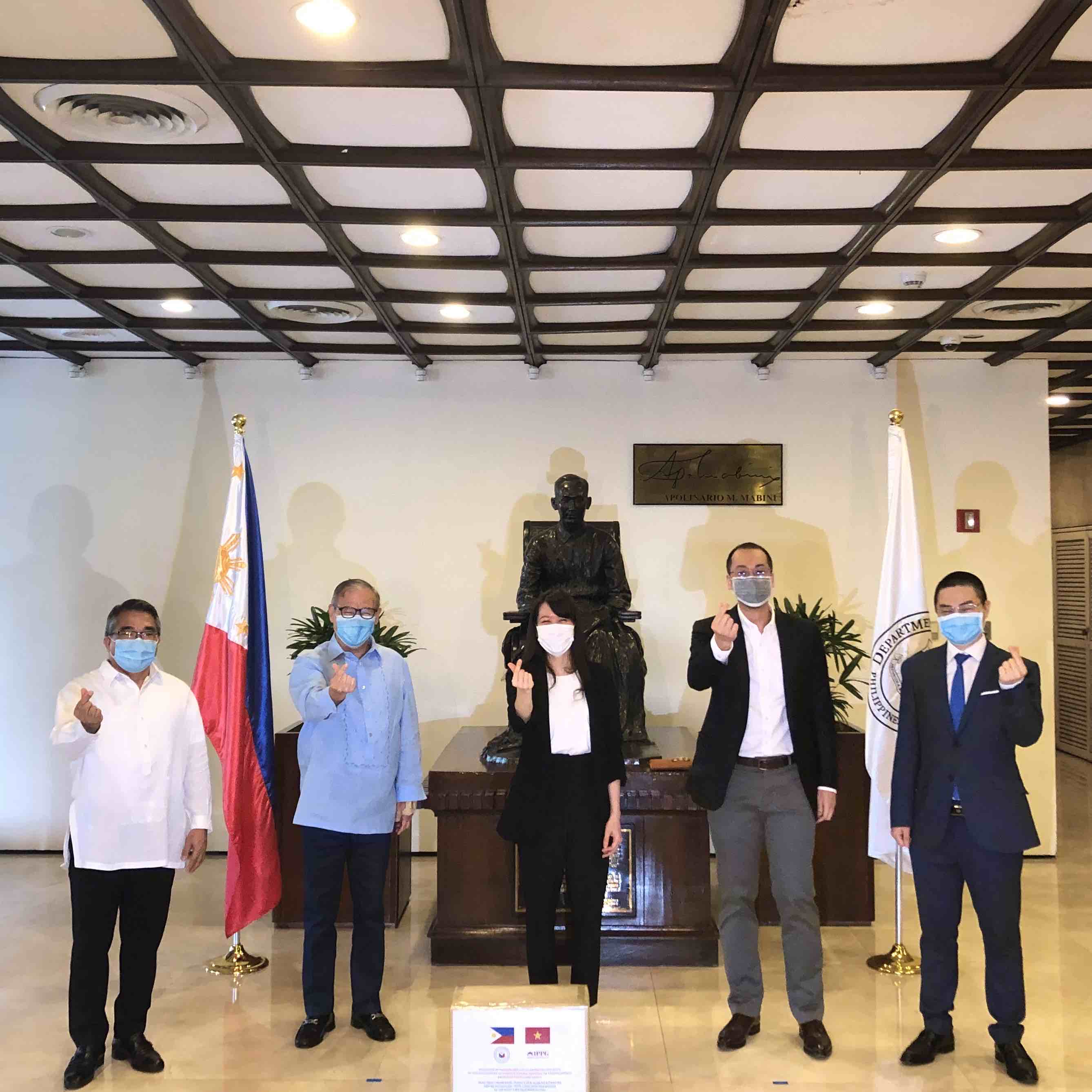 For a long time, IPPG has been known for the close relationship with Philippines. This is the country Mr. Johnathan Hanh Nguyen spent years to live and work before he came back to Vietnam and established his business. He was the first man to open the flight for Vietnam to the world, via the flight from Ho Chi Minh to Manila, Philippines in 1985.

Nowadays, IPPG has headquarter in both Vietnam and Philippines. In the upcoming time, Ms. Tien Nguyen & the Fund for Community of IPPG will play the role to contribute more charity act inside and outside the country.

In the past few months, Philippines has been damaged from Covid-19. This country is the third-biggest endemic region in ASEAN, with the record of almost 8,000 infected cases and over 500 dead cases. The doctor & nurse in this country has lacked severely of medical equipment. On March 24, president Duterte promulgated the National Health Emergency with validation in 3 months. This validation depends pretty much on the outbreak level of Covid-19.

Mr. Johnathan Hanh Nguyen: "Success Only Comes To Those Who Are Persistent, Quick-Witted, And Know How To Seize Opportunities To Realize Their Dreams"