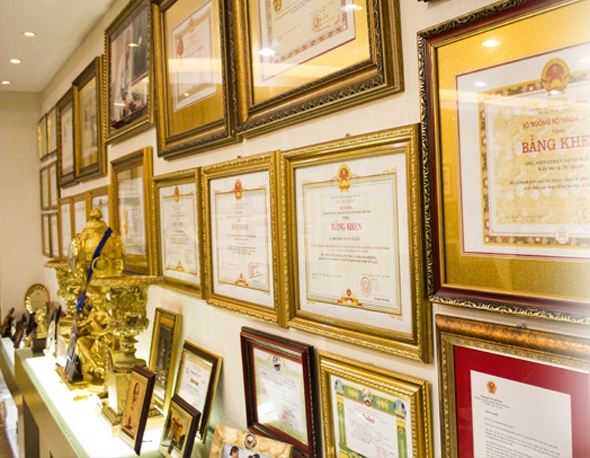 After 34 years of establishment and alongside our endeavours towards business operation contributing to the development of Vietnam Economy, IPPG persistently makes a meaningful impact to the society through various societal activities such as child support and culture enhancement. As so, we have faithfully accomplished our social mission on contributing our resources and influences to national advancement.

IPPG is proud of being one of a few private companies to be rewarded more than 350 Certificates of Commendation, Medals, Memorial Trophies, etc. for tireless contribution to the nation and the development of our society.

Beside economic achievements, IPPG is proud to receive many achievements regarding to social & charity activities in many consecutive years. Because of the efforts, IPPG was honored to award the 3rd class Medal of Labor by the President of the Socialist Republic of Vietnam in 2015.

In recognition of his achievements and contribution to the Vietnam economy and especially to socially responsible activities, the Ministry and the Prime Minister of Vietnam honored Chairman Johnathan Hanh Nguyen with 300 Medals and Awards of merit. Among those, the most notable awards are:

Meanwhile, continuously from 2013 to 2016, Ms. Le Hong Thuy Tien - IPPG’s President was honored as one of the most successful female entrepreneurs in Asia by international magazines and newspapers such as Forbes, The Guardian, Marie Claire US & Australia, Harper Bazaar, Her World Singapore & BOF. She was also honored to be awarded: