Home News Mr. Johnathan Hanh Nguyen Received the Medal “For the Cause of Education”

Mr. Johnathan Hanh Nguyen Received the Medal “For the Cause of Education”

Thanks to its contributions to the education and training, the Vu A Dinh Scholarship Fund has been awarded the Certificate of Merit from the Ministry of Education and Training.

The Certificate of Merit recognizing the results of the Vu A Dinh Scholarship Fund has gone through 21 years of accompanying the career of “growing people”, helping to change the lives of many ethnic minority students. 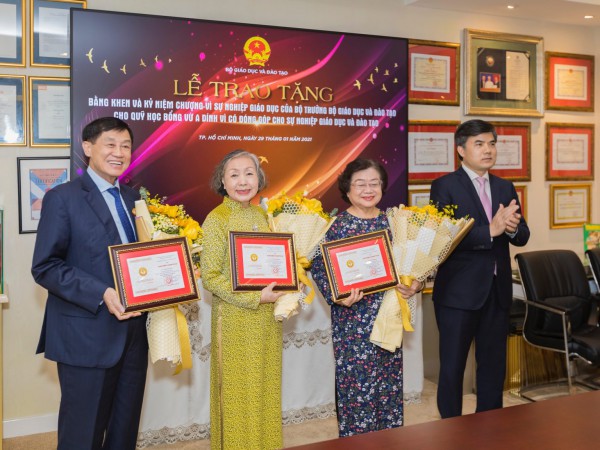 Three Representatives of the Vu A Dinh Scholarship Fund Received the Medal "For the Cause of Education" from the Ministry of Education and Training.

The representative of Vu A Dinh Scholarship Fund said that the "journey to the forest into the sea" of the Fund and the “For Beloved Hoang Sa - Truong Sa” Club deserves recognition and honor. “The certificates of merit and medals are the motivation for each member to strive to further develop the Fund and Club in the future, helping students who are from ethnic groups, islands, nurturing key human resources for the locality, contributing to the development of the country ”, said the Fund's representative.

Mrs. Truong My Hoa said that in 2020, despite difficulties due to the Covid-19 epidemic, the Fund and Club still receive the attention and contributions of many units, businesses, and individuals, including 128 new units, businesses, and individuals. From this contribution, the Fund organized a mission to 10 provinces and cities nationwide, supporting students in the Central Region who were flooded.

As for Mr. Johnathan Hanh Nguyen, the Artificial Intelligence (AI) Training Center built at the National University of Ho Chi Minh City will be inaugurated and put into operation in March. The Center will give priority to training students of the Vu A Dinh Scholarship Fund who are being nurtured at 22 schools in the city. This is a program aimed at training generations of global citizens, contributing to making Vietnam a developed country by 2045.

Vu A Dinh Scholarship Fund was established in 1999, exclusively for poor ethnic minority students who study well and strive to practice well nationwide. The establishment of the Fund contributes to fostering and developing young human resources in mountainous and ethnic minority areas. In addition to awarding scholarships, the Vu A Dinh Fund also implements intensive investment projects for students, future incubation projects, fosters dreams, paves the way for the future, and lights dreams.

IPPG donated 3 billion VND in the Program "Spring for Children"